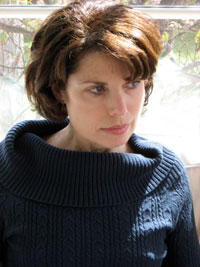 I grew up in Highland Park, Illinois and spent most of my childhood reading, reading, reading.  I can still remember curling up on my bed with A Little Princess (oh, those elusive diamond-mines), The Five Little Peppers and How They Grew, Eight Cousins (I liked it better than Little Women), A Wrinkle in Time (the man with the red eyes!), The Phantom Tollbooth and Nancy Drew.  I even, in desperation to find new material, made it through the entire series of The Bobbsey Twins one summer.  I knew from the age of six that I wanted to be a writer.

But as much as I wanted to write, I was afraid to try. I knew no one who was a published author.  To my mind, people who wrote books were important, exceptional beings, far superior to ordinary mortals.  To attempt to join so exalted a group felt impossible, and even a little silly.

I went to college at Cornell University and graduated with a BA in History.  History was fascinating; I loved learning about the past and, of course, I got to write papers.  After college, having rejected the whole writing idea as not being practical and as a result not knowing quite what to do with myself, I flirted with the idea of going to law school—my father was a lawyer and there was even a judge in the family, so it seemed kind of expected.  But ultimately I couldn’t see myself as a lawyer (and above all, I never wanted to do anything that was expected of me) so I went instead to Columbia University and took a Master’s degree at the School of International Affairs.  I had some vague idea that it might be nice to work overseas and perhaps be Secretary of State one day.

But this was in the 1980s, and Columbia is in New York City, and New York in the eighties was all about Wall Street.  It was the time of Michael Milken and Ivan Boesky and junk bonds.  There was a kind of irresistible magnetism about the financial world during that period that (at least for me) had nothing to do with money.  I just saw working in Manhattan in a big office building as a far more exciting and glamorous prospect than stamping people’s passports, which was what I found out I would be doing as a junior state department employee.  So after Columbia I went to work for a big commercial bank.  What can I say?  I was a callow twenty-something, and this is what comes of denying who you are.

Far from being glamorous, however, I found working in a big office building for a commercial bank to be utterly stultifying.  About the only good thing I can say for it is that I met my husband Larry while I was there, so in that way it was more than worth it.  A year and a half into my tenure as a loan officer, in an attempt to do something that required a pulse, I got myself transferred to the trading department, where I was hired as a clerk on the foreign currency options desk.  I had no idea what a foreign currency option was, or how to trade it, or why anyone would want to trade it, but trading certainly looked more exciting than lending.  There were rows and rows of computer screens blinking little green numbers on the trading room floor, and everyone talked into two phones at once, and then occasionally one person or another would slam one of the phones down and kick the trash basket across the room.  The two guys who ran the options desk wanted someone to do their paperwork and they took me.  Then, two weeks after I got there, they both quit and left me to run the bank’s billion dollar options portfolio.

I promise you I am not making this up.  In fact, if you’re interested, you can read the true (if somewhat surreal) tale of my extremely short, ridiculous career as an options trader in my first book, Trading Up:  Surviving Success as a Woman Trader on Wall Street.  It’s out of print now but you can probably find a copy for about four dollars on a used book website like www.abebooks.com.

Because yes, it was that experience—along with my husband’s prompting and unflagging encouragement—that finally forced me to overcome my fears and become an author.  Originally, I sat down and started writing to explain to myself what had happened, how someone like me had ended up in a profession so obviously unsuited to her particular skills, and the words just kept coming and coming.  I had about eighty pages before I understood that what I was doing was writing a book.  I asked everyone I could think of if he or she knew an editor at a publishing house (I was so green I didn’t even know you were suppose to use an agent) and eventually somebody gave me the name of an editor at E.P. Dutton and I screwed up every ounce of courage I had and sent in my eighty pages along with a short outline detailing what came next.  And, unbelievably, the editor bought it.

That was the beginning of my writing career.  Since then, I have written both fiction and non-fiction.  Not surprisingly, the subjects I chose over the years reflected the eclectic narrative of my life (eclectic being an elegant, literary way of expressing the concept of muddling through).  Other people have photo albums and videos; I have my books.  For example, after Trading Up, Larry and I moved to Lenox, Massachusetts where I wrote a comic novel called Mommy and the Murder, about a woman who solves a mystery with the aid of the mothers in her daughter’s play group.  Mommy and the Murder (also now out of print; try www.abebooks.com if you are interested) is my favorite of all of my books because, in addition to being fun, it is a portrait of my time in the Berkshires and, most importantly, of my beautiful beautiful daughter Emily as a baby.

Larry and I spent seven years in Lenox and it was a defining period for both of us, for it was in the Berkshires that we discovered the world of used and rare books.  Western Massachusetts is known for its used bookstores and the day I stumbled into one was a turning point in my life.  My passion for reading was, if anything, stronger as an adult than as a child.  In college I had discovered the Russian novelists and once stayed up all night reading Anna Karenina.  I also fell in love with many of the writers from the nineteenth century—Charles Dickens, Jane Austen, Honoré de Balzac—and so admired Vanity Fair that, as an experiment, I spent a week reading it over and over to try to understand Thackeray’s secret, the magic formula for writing a truly great work of fiction.  (Alas, instead of enlightenment, I learned only that if you read a novel over and over too much it loses all of its vitality and just turns into words.)

On the crowded shelves of the Berkshire book dealers I found, not just the obvious classics I adored (and at prices I could afford!), but also the unfamiliar and the out-of-print, and it was a revelation.  Together, Larry and I chronicled our ever-evolving literary tastes and amusing antiquarian antics in three memoirs:  Used and Rare: Travels in the Book World, Slightly Chipped: Footnotes in Booklore, and Warmly Inscribed: The New England Forger and Other Book Tales.  Only Used and Rare is still in print, but real book hunters should be able to find the other two as well.  If you are not currently a book collector, but are interested in becoming one, I strongly recommend that you have a look at our work only because we made just about every mistake it is possible for beginning collectors to make and it might save you a little money to learn from our often rueful experiences!

When Larry, Emily, and I moved from Lenox, first to Westport, CT, then to Sagaponack, NY, and now to Del Mar, CA, where we live today (well, at least Larry and I do, Emily has long since grown up and flown the coop), I took my interest in old books and my expanded reading tastes with me. It’s funny, but over the years I have gravitated more and more to biography and history—so much so that these days I read non-fiction pretty much exclusively.  (Well, almost exclusively.  I have been known to slip a novel onto the bedside table now and then.)  History—particularly medieval history—so captivates me that I have spent almost a decade of my life learning about it.  It’s like I have a wonderful film running through my head filled with the lives and adventures of all sorts of kings and queens and knights and ladies.  Best of all, by writing a book, I get to play every part!

Read Nancy Goldstone’s essay “I’m a Historian, and I Think Women’s History Month is a Mistake” in Time Magazine