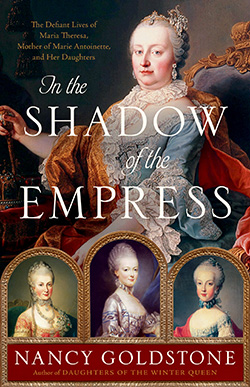 Out of the thrilling and tempestuous eighteenth century comes the sweeping family saga of beautiful Maria Theresa, a sovereign of extraordinary strength and vision, the only woman ever to inherit and rule the vast Habsburg empire in her own name, and three of her remarkable daughters: lovely, talented Maria Christina, governor-general of the Austrian Netherlands; spirited Maria Carolina, the resolute queen of Naples; and the youngest, Marie Antoinette, the glamorous, tragic queen of France, perhaps the most famous princess in history.

Unfolding against an irresistible backdrop of brilliant courts from Vienna to Versailles, embracing the exotic lure of Naples and Sicily, this epic history of Maria Theresa and her daughters is a tour de force of desire, adventure, ambition, treachery, sorrow, and glory.

Each of these women’s lives was packed with passion and heart-stopping suspense. Maria Theresa inherited her father’s thrones at the age of twenty-three and was immediately attacked on all sides by foreign powers confident that a woman would to be too weak to defend herself.  Maria Christina, a gifted artist, who alone among her sisters succeeded in marrying for love, would face the same dangers that destroyed the monarchy in France. Resourceful Maria Carolina would usher in the golden age of Naples only to then face the deadly whirlwind of Napoleon. And, finally, Marie Antoinette, the doomed queen whose stylish excesses and captivating notoriety have masked the truth about her husband and herself for two hundred and fifty years.

A Conversation with Nancy Goldstone

How did you come to write this book?

I have known for years that I wanted to write about Maria Theresa.  In fact, I have been building up to her.  I am fascinated by women in power and Maria Theresa’s history is one of the most compelling I have ever stumbled across.  The only female ever to inherit the vast Habsburg empire in her own right, Maria Theresa was attacked at the age of 23 by an overwhelming consortium of European powers who, believing her weak, intended to divide her lands and subjects among themselves.  Yet despite her youth and inexperience, she managed through intelligence, hard work, and sheer determination to overthrow her enemies!  Who would not wish to tell that story?

But you didn’t limit yourself to Maria Theresa—In the Shadow of the Empress focuses on her daughters as well.  Why did you decide to extend the narrative to include the next generation?

That is the advantage of having waited to write this book until I had thoroughly examined the history preceding it.  I could see from my previous work that it was possible to gain a much greater understanding of not only the empress’s life and achievements, but also of the entire tumultuous, wondrously transformative eighteenth century, by following the lives of her remarkable daughters as well.  Particularly when one of those daughters was Marie Antoinette, perhaps the most notorious queen in history! That was irresistible.

But there have already been so many biographies of Marie Antoinette, how could there be anything new to say about her?

It is true that Marie Antoinette’s story has been told many times before and for this reason I certainly did not go into this book believing that I would uncover anything original about her.  That does not mean, however, that I did not have many, many questions about her reign.  Much about Marie Antoinette’s behavior, and that of her husband, seemed inexplicable to me.  This is my sixth book of European history; one by one, in chronological order beginning with the thirteenth century, I have meticulously examined a slew of royal courts.  The rule of almost every king and queen I have ever written about has been threatened.  Many were forced to flee, but the vast majority (although not all, Charles I being the notable exception) escaped.  And yet nowhere but at the court of Louis XVI had I encountered a sovereign who did not at least try to send his wife and children away to safety.  Even Charles I got his wife and all but two of his six children out of England!  And this was only one of a multitude of behaviors that I found puzzling.

You assert in the book that Louis XVI was born with Autism Spectrum Disorder, an entirely new interpretation.  How can you be so sure of this diagnosis?  Isn’t it dangerous to try to judge an individual’s developmental profile without being able to interview or observe him firsthand?

Obviously, it would be better if we could sit Louis XVI down and subject him to a rigorous neurological examination but unfortunately that is not possible with someone who has been dead for over two hundred years.  I may not be a physician but as an historian I am used to sifting through observed evidence.  In the same way that Charles VI,  fifteenth century king of France (who spent approximately six months of every year of his adult reign running around his castle naked, covered in his own feces, and raving that he was actually somebody named George), is today accepted as having suffered from schizophrenia, so Louis XVI’s behavior from early childhood on—the avoidance of eye contact, the unwillingness to engage with others, an inability to carry on a conversation, odd physical movements and facial expressions, a fanatical commitment to routine, among other symptoms—would today unquestionably be diagnosed as ASD.  (And I of course did run all of this by accredited experts in the field.)

But how is it that no one else has seen this?

Autism Spectrum Disorder is a relatively new condition, at least by historical standards.  It’s really only started to come into focus over the last couple of decades, and the U.S. is at the forefront of the research.  Europeans are not as familiar with it, which is perhaps why Louis’s symptoms did not trigger the sort of recognition among French and English historians that hit me almost as soon as I started looking into his background.  And biographies of Marie Antoinette don’t generally delve into Louis’s behavior—those authors are far more concerned with detailing the queen’s actions.  But, as I said, I am used to looking at other courts and because of that I saw instantly that Louis’s behavior was unusual.

What is the impact of this diagnosis on Marie Antoinette’s life and reputation?

It explains everything, including the couple’s failure to consummate the marriage (it took seven years for Louis to understand what was expected of him and then only because Marie Antoinette’s brother explained the mechanics of conception to him); the king’s inability to make even the smallest decision on his own and his consequent reliance on his ministers; and his wife and sister’s refusal to leave him during the revolution (they were protecting him, and not the other way around as would have been the case at any other court).  There’s much more but you get the idea.  What this meant specifically for Marie Antoinette was that she was by default the public face of the monarchy and so got all the blame for policies that for most of her reign she had nothing to do with and could not have changed even if she had wanted to.

You also assert that Marie Antoinette’s two youngest children, including the son who became Louis XVII after the execution of the king, were actually fathered by her Swedish lover, Count Axel Fersen.  Also, that Fersen was with Marie Antoinette in her bedroom on the night she was attacked by the mob at Versailles.  How can you be so sure of this?

The problem was not establishing that Count Fersen was the queen’s lover; evidence of a long term affair is very persuasive.  And examining the many letters they wrote to each other, it is also clear both the queen and Fersen were convinced that he was the father of her younger children.  But for historians, the question has always been, if this was true, how had they gotten away with it for so long?  No other French king in history would have accepted this situation; it was by definition treason against the state.  It just didn’t make sense that Louis would not punish his wife if she was really having an affair.  But coupled with a diagnosis of ASD, Louis’s passive reaction to Marie Antoinette’s infidelity suddenly becomes far more comprehensible.

What about Maria Theresa’s other daughters?  What were they like?

They were exceptional, and among the most impressive women I have ever had the good fortune to write about!  Marie Antoinette’s sister Maria Christina, in addition to governing first Hungary and then Belgium with extreme competence (before she was targeted by the revolution), also managed to assemble the magnificent collection of paintings and drawings which today form the permanent exhibit of the world-famous Albertina Museum in Vienna.  And Maria Carolina, the sister closest in age and affection to Marie Antoinette, was even more extraordinary—she ruled the kingdom of Naples, guided it into its Golden Age, and then fought tenaciously against Napoleon, all while being saddled in marriage to Ferdinand, king of Naples, who gets my vote for all-time worst husband ever.  Maria Carolina’s hilarious dealings with her hopeless spouse are not to be missed!